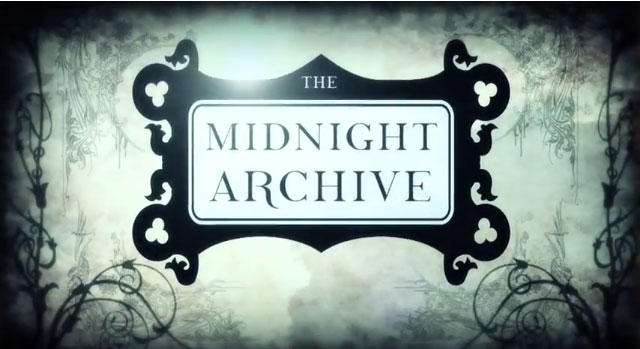 Remember television? That was awesome.

Television was that thing that even when it was lame (commercials) it had the potential for being insane (Zoobilee Zoo). Well, television is over. But this new thing called the intranet is going to take off like undies at a poly-friendly post-gender anarchist adult play party. And here’s why….

The Midnight Archive is the spawn of Brooklyn’s own Ronni Thomas, a former editor at Troma (think: Toxic Avenger, et al.) whose left-of-center works riddled with visual uncomfortability will woo you to the oily slumber that is the region between the dream and feast. (His stuff can be found here).

But first, here’s what he had to say about Midnight Archive:

About an ODD year ago, or so, i had the honor to lecture at the ever impressive Brooklyn Observatory in, well… Brooklyn, NY. I was amazed at the turnout – I could not believe so many people were interested in such strange topics. Talking to Joanna Ebenstein of Morbid Anatomy and the Observatory itself, it seemed apparent that there was a demand for a series on the exotic and the esoteric.

Hence – The Midnight Archive… Its not only a web series but a collection – so to speak – of some of the unique people, collections, careers and artifacts from the Observatory as well as around the world. Consider it a sampler, an Observatory Sampler – like those Whitman’s Chocolate Samplers (only don’t crush each of these to figure out whats inside).

If you’ve been reading this thing, you know I get all sorts of funny feelings in my pants when I think about Observatory and Morbid Anatomy. So, it should come as no surprise that I’m defs excited to check this out.

The first episode will air on September 9. Not sure what time. And not really sure “where,” but I’m guessing it’ll be somewhere around the website itself. So check there.

Obviously, this is the cast of Zoobilee Zoo.

Thanks to Phantasmaphile for the hip tip. Got a tip yrself?!?!?! Click here to let me know.