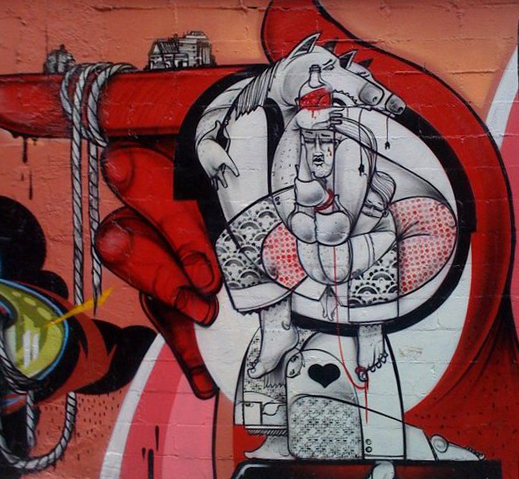 There is something to be said for using outdated travel guides, particularly when visiting New York. My choice, New York Unexpurgated is a highly inventive, excruciatingly funny field guide credited to “Petronius.” It’s hard to imagine anyone using this as an actual vade mecum, even when it was released in 1966. It seems to be more a work of wishful, absurdist psycho-geography. For example, if an adventurous traveler wishes to visit the mysterious Key Club of the 7 Rooms, she must first pass muster at a sketchy Chinatown candy store called The Jellybean Path. Once at the alleged club, she will find seven rooms “jam-packed with indescribable nonsense” lit only by a “trained ape of undefined sex” that moves a single light bulb from one nook to another every 15 minutes. How I wish that such a place existed, but I am doubtful of the book’s claims of simian efficiency, to say the least.

I brought this book with me to New York City, curious about its promise to lead me to the “under underground” and soon have me “going down in Gotham.” As suspected, it was worse than useless for this, but it is a wonderfully tawdry and unreal read. Any legitimate entries, if there are such, would be 44 years out of date and long buried beneath the shifting urban palimpsest. But what it lacked in practical advice, it more than made up in amusement value. It’s almost impossible to turn to a random passage without succumbing to belly-laughs. Also, this tome seemed like a useful tool for a dérive (“…a technique of rapid passage through varied ambiences. Dérives involve playful-constructive behavior and awareness of psycho-geographical effects, and are quite different from the classic notions of journey or stroll” —Guy Debord). The playfulness of such an approach is irresistible to me and ideal for a walking city like New York. Combined with my own list of pilgrimage points from the past (here is where CBGBs used to be, here is the former site of Peace Eye Books), the book was less useful than inspiring. It did lead me down the Jelly-Bean Path, though, and I did see a few sites that would have made great entries in an updated edition.

I made this journey in the aftermath of three weeks of chronic kidney stone agony addressed by a procedure called extracorporeal shockwave lithotripsy: blasting the stone with a high-intensity acoustic pulse. Additionally, the after-effects of anesthesia left me feeling abstracted, as if I had been dropped down into someone else’s life in progress as an observer. I was tabula rasa, soaking up raw experience while enduring a newfound naiveté and shyness. In so many respects, it was as if my reset button had been pushed. This was later to prove socially problematic, but in the short run it was the ideal state in which to travel, something I hadn’t done in too long.

It’s said that Texans don’t do well in New York City. The constant interruptions of the horizon supposedly put the whammy on their heads. Don’t fence me in! But for me it was paradise. My niece and her family offered their hospitality in the East Village and I found myself scant blocks from almost everything I wanted to see or do. After a fine lunch of jalpeňo squid at Shanghai Joe’s, we dashed to the New Museum for the astounding exhibit “Brion Gysin: Dream Machine,” an exhaustive display which included a dream machine lounge that allowed me to hunker down before the flickering, trance-inducing lights. Later, we caught a midnight show of Wings of Desire at the Anthology Film Archives, blocks from my niece’s apartment. It was the first of many happenstances, a film I had never seen that had been highly recommended to me by a friend weeks before and was partly inspired by the poetry of Rainer Maria Rilke. I was impressed by the seriousness of the place: no snacks, no chit-chat and everyone sat through the credits. For me, in my post lithotripsy state of psychic absorption, the tale of an angel who sacrifices so much to experience the solace of human sensuality reverberated like a gong. And New York City filled me like an empty vessel as we raced to Coney Island for fried clams and a ride on the historic Cyclone roller coaster before a cloudburst drove us into the freak show for old style patter and post-modern oddities. Later, sitting with my niece in Tompkins Square Park while my great-nephew played, I told her about my fascination with The Fugs and the East Village roots of Punk. I enjoyed viewing the area through the lens of its Bohemian history, opening myself to any traces of social upheaval and creative experimentation.

I walked for miles and miles. When my niece and her family finally rested, my Chelsea nephew dashed off with me to see Highline Park at my request, an exquisite garden crafted on several blocks of rail line dating back to the 1930s. Later, we took the subway to Brooklyn to see Texas homeboy Corn Mo and 357 Lover at the Knitting Factory, where we were treated to a variety show unlike anything in my experience. We also checked out the historic Chelsea Hotel in the wee hours, just as a grizzled dude clutching a huffing rag to his face staggered by.

By this time I was becoming aware of the medicinal impact the Big Apple was having on me. It seemed like a beautiful phantasmagoria of delicious ethnic food, street art, friendly people and music coming from every direction. I love walking and marveled at the variety that could be encompassed within a few blocks. I soaked up raw experience, slept soundly and enjoyed lengthy soulful discussions with family. Any quest or whim I had was indulged by my hosts, who howled with laughter at excerpts from New York Unexpurgated.

After spending a few blissful days enjoying my sister’s hospitality at Lake Kinderhook, I returned to the City to prepare for my departure. My flight was to leave at 5:30 a.m. and I stayed up most of the night visiting with my niece. She loaded me up with volumes of poetry by Fugs front man Ed Sanders, allowing me to look backward through the crystal ball of his book-length poem, 1968. Having walked this way and that, and traveled back and forth in time, I took something ineffable home with me, something that shimmered in my heart like a pearl. Like the angel Daniel in Wings of Desire, I had transitioned from being a mere observer, abstracted from my own life by severe pain and anesthesia fallout, to an ecstatic participant joyfully embracing the rawness of experience and the sensual joy of being alive. What more could a traveler ask for?