Vishnu taking a rest/bath in Kathmandu

Thanks to Not New York reader, Gary, for the tip regarding Brooklyn Museum’s recently opened exhibit Vishnu: Hinduism’s Blue-Skinned Savior, which will be hanging on the walls from June 24 to October 2, 2011 in the Morris A. and Meyer Schapiro Wing on the 4th Floor of the building.

Vishnu: Hinduism’s Blue-Skinned Savior is the first major museum exhibition to focus on Vishnu, one of Hinduism’s three major deities. Presenting approximately 170 paintings, sculptures, and ritual objects that were made in India between the fourth and twentieth centuries, this exhibition serves as a brief survey of Hindu art styles as well as an examination of the Vaishnava (Vishnu-worshipping) tradition.

I must say, poor Vishnu. Being 1/3 of the Hindu Trimurti consisting of Brahma the creator, Vishnu the maintainer, and Siva the destroyer, has got to be a tiring act. Think about it: when on one side you’re flanked by a God who brought the entire universe into being and on the other by one who just can’t wait to mess it all up, what’s the ever-issue-ridden middle child to do? The creator gets the praise. The destroyer gets the boons, but what does the caretaker get?

Well, what did Jack in Steve King’s The Shining get for taking care of the hotel?

The Himalayas can get cold

That’s right. A whole bag of crazy is what he got.

All the while Siva is busy dancing up and down the streets taking monster tokes off galaxy-sized chillums while he instructs the willing in secret ways to merge with the primordial Shakti.

It’s about time Vishnu got some recognition! 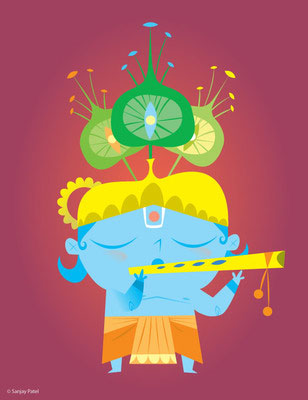 In addition to the paintings of Vishnu in His many forms, there will be a few images of Vishnu temples, as well as some artifacts used in ritual.

Also, and here’s where it gets kinda weird, there are a bunch of illustrated avatars created by the very creatively cuddly Sanjay Patel that apparently “accompany” visitors throughout the exhibit. Of course, I have no idea what this means, but at the time of writing this piece the website stated that our friend Krishna (pictured above) has “accompanied 34 visitors.” Again. No idea what this is about.

Also, it should be mentioned that there is a Sanjay Patel-created avatar of the Buddha (pictured below and clocking in at 20 accompaniments) to accompany you on your journey.

It has something to do with the phrase: if you can’t beat ’em….

I also mention it because back when I was a sixteen-year-old kid debating Hare Krishnas on the principles of Buddhism (having already read Being Peace and What the Buddha Taught, I believed I was a bona fide spiritual master!), I was told numerous times by said Krishnas how the Buddha, being an avatar of Vishnu, came to Earth only to lead the ignorant astray through a false teaching. That is to say, according to my young Shelter-obsessed devotee contemporaries, the Buddha was simply a slippery Pied Piper on par with one particular snake in the Garden of Eden set in motion to expose the wicked.

Ahhh… ISKCON. Your 90s hardcore-punk manifestation could be so diabolical!

Anyway, enjoy the exhibit if you go and don’t forget to check out the ever-awesome Ancient Egypt exhibit. I love it!

Hey! If you’ve got any other tips, please click this here link and let me know.