Rapture Wrap Up |:| You May Not Have Gotten Raptured, But Throwing Stones in Glass Houses is Still a Bad Idea

This weekend I heard a lot of this “those people are idiots” type talk with regards to Raptureists, and I must admit, it’s kinda bumming me out.

It seems ever since Harold Camping amped up his May 21st bid for Rapture-gate 2011 everyone’s become this expresive über-above-it-all-cynic who just can’t believe how people could be “stupid enough” to believe that they’d be flung up into the sky in a rapturous display of God’s mercy.

I mean, take a look at this picture: 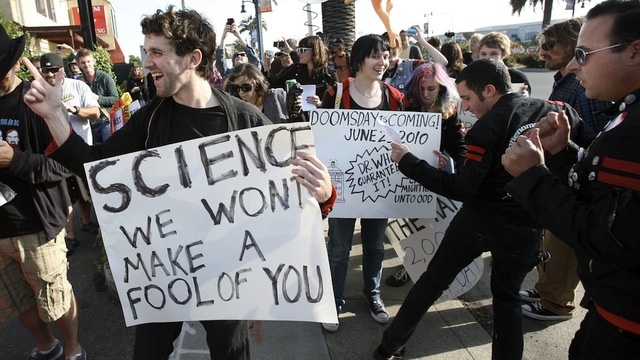 People...including the Phenomenauts, gather in front of the closed Family Radio station offices of radio evangelist Harold Camping, to celebrate irreverently, the non-destruction of the world predicted by Camping, Saturday, May 21, 2011 in Oakland, Calif.. (AP Photo/Dino Vournas)

There’s something about this picture of insignificant white kids demonstrating outside Family Radio‘s offices that just makes my blood boil!!! Is it seeing the super-average band the Phenomenauts wishing they were the Nation of Devo-Ulysses caught in the action, or the haircut in the front who loves science. For my money I guess it’s gotta be the science guy, ’cause obviously science is without a doubt the most awesome thing to ever grace the planet.

Science: convinces women to—contrary to the law of gravity—lay on their backs to give birth.

Science: determined homosexuality to be a disorder until the 80s when the DSM III finally got it’s whacked out shite together.

Science: filled your mouth with mercury when you had a cavity, (ignoring?) forgetting that it also taught you that mercury f’s you up when you ingest it.

Science: the happy home of eugenics.

Yeah. Best put all your eggs in that basket (unless of course, you’d like to donate them to science).

Personally, I feel kinda sad for the Rapturists. To believe so much in something and then have it shat on in your face…that’s gotta be hard. I don’t know anyone who doesn’t rely on some form of ultimate belief that on the daily gets them out of bed every morning. Whether it’s a belief in God, or Love (though usually that’s the emotional lower-case “l” kind), or that your girlfriend isn’t planning on bonking your best friend right now as we speak, there’s not a single sad soul out there not relying on something to get her/him through the day.

I mean, yes, it seems insane to me to think someone would spend their entire life savings on billboards and fliers promoting something as hateful and diabolical as the Rapture. But, ya gotta feel for the guy when it doesn’t happen, right? That’s gotta be an intense let down. It’s not like he was waiting for the bus to arrive. He was waiting to be—literally—lifted off the ground and taken to heaven!

Gawker caught up with Robert Fitzpatrick, the MTA guy famous for hoping just that, and when he wasn’t swooped up he simply said,

“I do not understand why …,” as his speech broke off and he looked at his watch.

“I do not understand why nothing has happened.”

Damn! I’m sorry, I just can’t help it. Maybe I’m too sentimental, but I was rooting for the underdog on this one. Even in this case when the underdog is stoked on leaving me behind in a fiery pit of hell fire, I can’t help but still feel for him when it doesn’t happen.

I don’t know…like…may next year you’ll get to abandon my sorry arse on a planet God forgot.

Ah well. Best of luck sorting that one out in the ole brain.