Behold, as my odes, manifold on your rhymes
Two MC’s can’t occupy the same space at the same time.
It’s against the laws of Physics.
—The Fugees, Lauren Hill at her most i-rific

Look whose weekend just got awesome. Yours did!

I mean seriously, is New York Town ready for a weekend of double Das kirtan wizardry?

This weekend, Krishna Das will be holding a workshop at Integral Yoga Institute. The cost will be $250 for about fifteen hours of “Kirtan, group chanting of the Hanuman Chalisa, discussions about spiritual practice, in-depth Q & A sessions, and heartfelt community.”

Guaranteed KD tells the story of when his guru, Neem Karoli Baba, instructed him to “Love people. Serve people,” when all he wanted to really do was raise his kundalini. The direct simplicity of the teaching blew Krishna D away, and set him on a new path, which ultimately lead to sold out kirtan pop-rock concerts. It’s a fantastic story, but, you know, every…single…concert…. (haw haw). 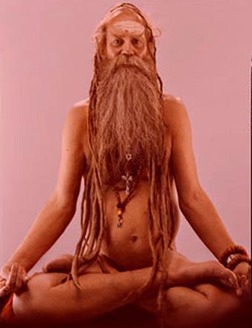 Of the many Das’ floating around these days, Bhagavan is definitely the one you’d think twice about bringing home to your mama. Not necessarily because he’s a bad seed, but more so ’cause you’d be afraid he’d get down on all fours and begin to worship her feet as an expression of the Divine Mother. This Saturday he’ll be doing something close to that at Dharma Mittra Yoga West, owned by every old-school New York City yogi’s first teacher, headstand-obsessed yoga master, Dharma Mittra.

I’ll be at the sweatier of the two.

An aside: Obviously, I am dying to say more on these events. One could have a veritable field day delving into the cultural implications of the two aforementioned kirtan walas, and how their brand of bhakti yoga has influenced yoga in the States. But, for better or worse, I’ll be running around the city today watching and reviewing films for this amazing site. Will have to say more at a later date. Boo.