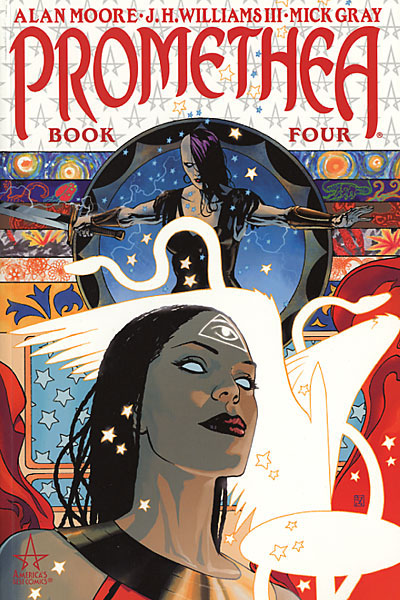 If you’ve read Alan Moore‘s Promethea than you already know that we all participate in, share, and manifest this thing we might call the Big It, each one of us in her/his own time and unique way. Yesterday I had a passing taste of that, one of those “The Universe is Paying Attention” moments involving me, Promethea book 4, and a wild-eyed man with a rogue tooth and lots of conflicting ideas in his head.

I was riding the F-train home from the city. The car I was in, like many cars headed back to Brooklyn during the tail end of rush hour, was more or less empty. Across from me was a short, fat, scruffy guy all bent out of shape about this and that. Cursing, visibly annoyed at life itself, and complaining to everyone and no one about how rude it is to not cover your mouth when you sneeze—”They never do!” he said—the man was your run-of-the-mill subway crazy guy. The guy you move away from.

Having gone to Naropa University, and having heard many a story about its founder, Chogyam Trungpa‘s, embodiment of  “crazy wisdom,” his unconventional approaches to teaching, and having (allegedly) kept a mentally disabled person around to keep students on their toes, when confronted with a man or woman slightly off the proverbial rocker, I try and breath into it and ride the wave of psychosis. What the hell does that mean? I try to not run in the opposite direction. 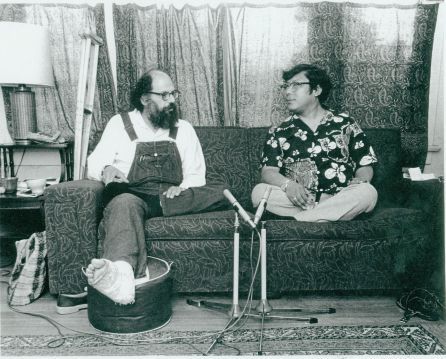 Allen Ginsberg with Chögyam Trungpa, Rinpoche. One of the earliest known photos of them together. Spring, 1973. photo: unknown.

Many born-n-raised New Yorker’s have already got this down pat, and didn’t have to read a million books on the “present moment” to get it. Unless the smell emanating from the guy’s balls is beyond the beyond, most old-schoolers just chill out and read the paper. Having grown up in the suburbs, however, I was taught to jump ship every time a situation wasn’t groomed according to my liking. That said, having wild New Jersey Italians for parents also taught me to roll with the punches, so I guess I fall somewhere in between.

So the dude is freaking the train out. He’s yelling, pacing, grumbling about the subway jerking when the brakes are hit. Then he stands up and starts trying to do (I think) a sudoku puzzle with the puzzle on the bench. Like, he’s standing, leaning over the puzzle and then getting all sorts of freaked out when the train moves an inch and his pen misses the mark. It was a shit show.

But me, I’m playing the calm-in-chaos guy, half reading book 4 of Promethea and half watching this dude spill his mental beans everywhere. Of course I got a slight judge on, but I’m trying to hide it, right….

And then he catches the cover of my comic and his eyes light up! From pissed off angry guys comes happy chatty comic book guy, Kali and Durga in reverse!

Then he sits down across from me. I start to get up ’cause my stop is approaching. I throw out whatever last bit of language I got in my pocket,

“Yeah. Make sure you check it out.”
“Yeah. I like that one about that metal band…uh…uh…Metallica! Yeah that was good.”
“Oh really?”

The doors open and I step outside. He yells out to me while I’m walking away looking back over my shoulder.

To which he cracks himself up laughing and gives me the thumbs-up.

Now, I know that when he yelled that last bit to me he was simply remarking on our shared appreciation for the illustrated narrative, however, what my brain heard was, “I’m a freak too!” And his thumbs-up confirmed it.

He and I are the same, if not cut from a similar cloth.

Promethea, Patroness of Babalon, Ruler of the Apocalypse, has just raised the stakes. I think Alan Moore would appreciate that.