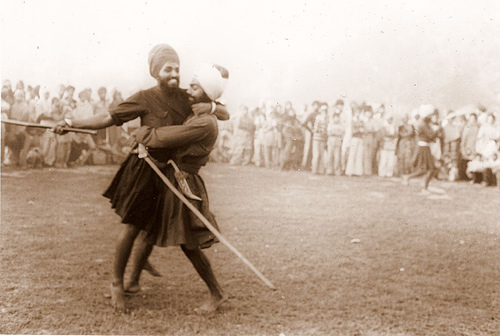 These are the kinds of Sikhs we known and love. Not those other baddies. Courtesy Gurumustuk Singh

Here’s something you don’t hear about every day: Apparently, a group of angry Sikhs armed with at least one sword and a cricket bat stormed a gurdwara in Queens this past weekend and went ape shoes on the the whole scene, forcing one man to report, “They cut me. They tried to cut my arm off, but the sword got caught on [something]. I’m very lucky.”

According to a NY Post article aptly titled “Queens Turban Warfare” (hilarious), the attack was fueled by a recent election that went sour for the recently ousted.

Rival factions at the Baba Makhan Shah Lobana Sikh Center in South Richmond Hill have been bickering for months over control, authorities and members said….

The alleged attackers—armed with at least one sword about 40 inches long, and another sword, according to a witness—were part of the old guard that had been recently voted out of power but refused to accept the decision, even going to court to challenge the election.

In the end, a few scrapes, a little blood, and a couple stitches rounded out the untypical prayer service.

Seven people were arrested, including Harinder Singh, 47, who was charged with assault after allegedly punching a man in the eye. Others were charged with unlawful assembly, resisting arrest, rioting, and disrupting a religious service.

In all honesty, I’m often surprised I don’t hear more stories of Sikhs attacking other Sikhs, what with all the governing bodies, elections, ecstatic Bhangra dancing, and kirpans floating around. But the truth is, Sikhs, like everyone else, are mad peaceful when they want to be, and with Nanak’s words of wisdom in their pocket, can be as cool as cucumbers:

“No one is my enemy. No one is a foreigner. With all I am at peace. God within us renders us incapable of hate and prejudice.”
—Nanak, first Sikh guru

But in the end, new temple president, Gurmej Singh, suggests the naughty greenback is trumping the lessons of even the holiest of Sikh holy books/the last guru him/itself, the Sri Guru Granth Sahib:

“Something is behind this,” said Gurmej Singh, who accused the old regime of financial mismanagement. “It’s money.”

You could probably tack on greed, hurt feelings, emasculation, bruised egos, and claims of foul play to that, but in the end, we know it’s probably the skrilla. Skrilla and fear. You can always find those two in the back room making out while the rest of us bumble along listening for the next call to prayer.

Get a room, you two.