The New York Times reports that international meditation guru, Sri Sri Ravi Shankar (not to be confused with the singularly shri’d nimble-fingered sitar player of the same name), has been meandering around Times Square promoting the launch of his I Meditate NY initiative, “A meditation movement empowering New Yorkers to do more of the things they love by recharging through meditation: a practical way to refresh every day.”

Well known as the founder of The Art of Living, Shankar is the quintessential “super guru” and is back for the first time in five years along with Grammy nominee Chandrika Tandon and the multi-culti to the extreme kirtan fusion (that is, with acoustic guitars) group Bhakti having just held an event at Lincoln Center.

Speaking of “East Meets West,” is that still the only lens through which we can see gurus visiting New York City? Are we all still doing the look at the quaint meditator guy walking around our enormous city thing? The Times article even goes as far as to suggest that walking around Times Square might be “sensory overload” for Sri2 Shankar, which comes across as slightly arrogant, if you ask me.

Straight up. New York City can’t hold a candle to the insane wanna kill yourself hyper congestion and sensory mayhem that is India’s New Delhi or Kolkata. To state it simply, a friend of mine’s subletter from Kolkata said she loved NYC because it was so predictable. Predictable! I mean, have you ever seen a bus literally, slowly, and with oafish precision push a bicycle (with a rider on it) out of the way into bumper-to-bumper oncoming “traffic” that ultimately pushed the cyclist back into his previous spot? I have. It happens very slowly and very deliberately.

However, I don’t doubt that amplifying the East meets West trope is part of the whole gig on Shankar’s part, which I know somehow sounds like a criticism, but it really isn’t. The article definitely tows that line, presenting Shankar as a serene stereotype, smiling but not responding to people who ask him questions, and making pleasant ironic quips about how nice it is to take a “stroll” through Times Square. At which point we all go: Wow. Look at how calm he is in a part of the city that usually makes me want to have my testicles incinerated.

For me, it all sounds very “sixties,” referencing a time when it was novel to be “calm in chaos.” These days, however, as every yoga studio empire-lite clamors for a little Times Square samadhi… 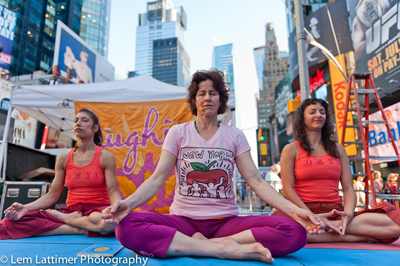 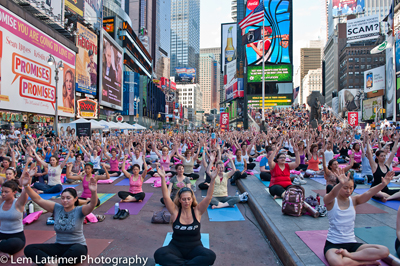 …I need my gurus to be a little more up in my grill and on my case—less cutesy sanitized bobble-head Jesus—’cause I’m a tough client. Help me!