Will Vodou Become the Next Fad? 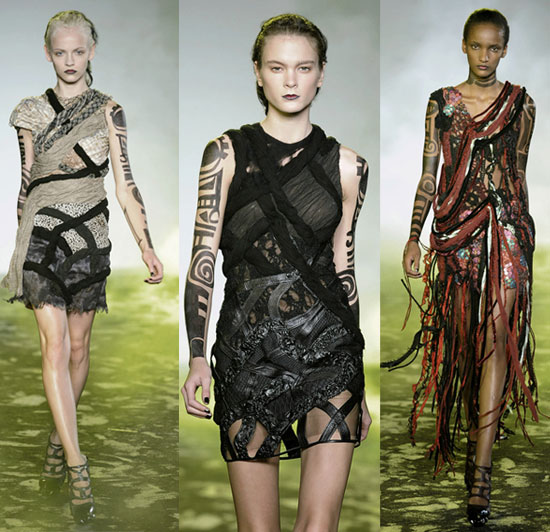 “[Recuperation] also happens irrespective of the startling content of the style: punk clothing and insignia could be bought mail-order by the summer of 1977, and in September of that year, Cosmopolitan ran a review of Zandra Rhodes‘ latest collection of couture follies which consisted entirely of variations on the punk theme…. The accompanying article ended with an aphorism—”To shock is chic”—which presaged the subculture’s immanent demise.”
—Dick Hebdige, Subculture: The Meaning of Style, 1979.

Lately I feel like every time I read the news I read a new story about vodou. Allah knows we’ve been on top of it for some time now, but I can’t tell if I’m seeing more of vodou because lately I’ve been more interested in vodou or if there really has been a great deal more of vodou in the news.

Than, last night while skimming my news feeds I caught an interestingly worded link on Gothamist. It read, “Voodoo: So hot right now,” and linked to this favorable article in the New York Times. I was psyched to finally see coverage of vodou that didn’t discuss it as if it was inherently the ass crack of all religions. But I must say, that little bit on “so hot right now” definitely sent some there goes the neighborhood shivers down my spine.

Is vodou the next exotic spiritual tradition to get man-handled by hip white spirit-deprived fauxhemians eager for some third world spirituality to help veil the ills of his/ her own born-into opress-fest?

When I think of this situation I am reminded of Hakim Bey’s piece “Against Legalization.” which basically states that making normal or legalizing an outsider tradition (such as pot, in this instance) basically destroys all that is good about that tradition.

Now don’t get me wrong. This wanting to keep things illegal or on the fringes is a pretty white-boy move. Only a so-called white-boy is really in a position to hope vodou remains marginal and pot remains illegal. So-called white-boys are rarely severely effected by the ramifications of possessing illegal substances and practicing a faith seen as antithetical to the dominant system.

However, it just makes me nervous.

But then I remember: Movements that are worth their salt can make it through the trendy interests of appropriators. Remember when McDonald’s got really into breakdancing? That should have been the death rattle of hip hop. But b-boys still be down rockin’ and ya don’t stop.

And remember when McDonald’s was really into Down Syndrome?

Maybe there’s nothing to worry about.