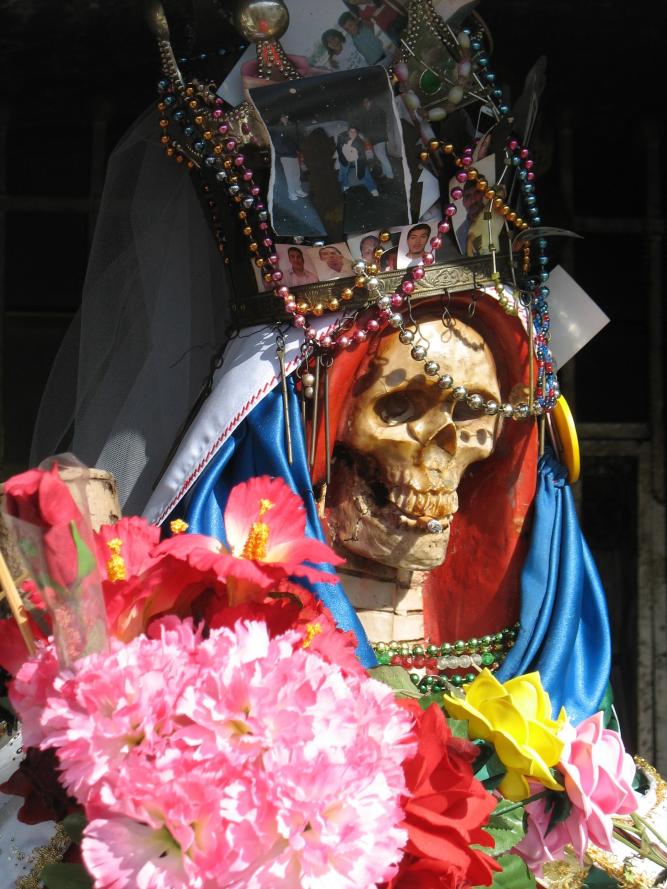 Who’s more excited than me to find out that Morbid Anatomy in conjunction with Observatory will be screening “La Santa Muerte” (“Saint Death”), this Thursday, February 24th? No one.

In Mexico there is a cult that is rapidly growing–the cult of Saint Death. This female grim reaper, considered a saint by followers but Satanic by the Catholic Church, is worshipped by people whose lives are filled with danger and/or violence–criminals, gang members, transvestites, sick people, drug addicts, and families living in rough neighborhoods. Eva Aridjis’ documentary film La Santa Muerte examines the origins of the cult and takes us on a tour of the altars, jails, and neighborhoods in Mexico where the saint’s most devoted followers can be found.

We here at NNY have been little pesky muertes ourselves as we comb the city’s botanicas for the necessary accoutrement that will cure a bit of what ails us. (Much more on that in the coming weeks). So it comes as a great pleasure to hear about this little screening in honor of Santa Muerte, who by leaps and bounds, creates more gringo shitty drawers than any other santa.

In addition to the screening will be a Q&A with director Eva Aridjis who, among other things, way back when directed the video for The Walkmen‘s cathartic FU opus “The Rat.”) You can watch all of its angsty glory below:

Speaking of said opus, I remember seeing The Walkmen open with this song at a fancy fraternity “barn” on a fancy college campus in PA ten years ago and being absolutely butt-pummeled by its “fuck you” intensity. That said, I remember almost nothing else from the set, as everything after was mired in a sea of “Holy shit. Did you just hear that?!” About a year later The Walkmen became the loudest soft band of all time and I stopped listening to new music in favor of roots-rock-reggae.