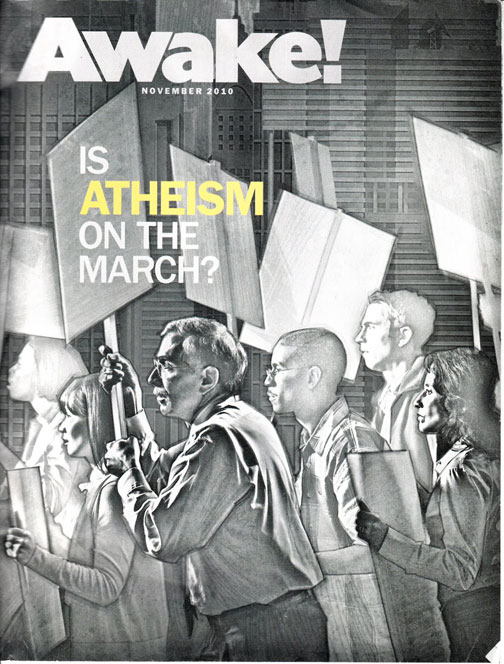 I would say nine times out of ten I take religious propaganda with a grain of salt. This is not to say I don’t absolutely love it, collect it, and find myself moments away from “getting the haircut.” But, the fears aspect of religious propaganda, the “Hide your children, the gays are coming!” aspect of so much religious free literature is something I just keep cool about.

This month’s fear is one I rarely come across, and the Watchtower published Jehovah’s Witness free mag, Awake!, is on it like a bonnet in a sonnet.

What’s all the hallabaloo about? You guessed it: atheism. The wild-eyed secular beast of the forgotten God-less landscape.

Atheism has been going through quite a revival lately. Book sales are up and actually competing with the sales of religious lit, kinda slimy-looking snarksters are unbuttoning their shirts All. The. Way….

And, there’s a new confident visibility… 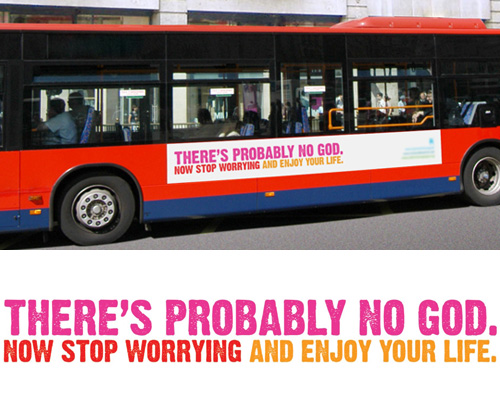 This is pretty good (UK)

Of course, the atheist argument against religion is almost entirely bogus [It’s about belief systems, people. It don’t matter if it’s religious or otherwise], but that doesn’t stop both hipster secularism and the religiously inspired from gettin’ all fired up.

This month’s Awake! is all about how atheism is not only on the rise, but actually a threat, bordering on that of a “crusade” (interesting choice of words for a religious rag). The article starts off stating:

“A NEW group of atheists has arisen in society. Called the new atheists, they are not content to keep their views to themselves. Rather, they are on a crusade, “actively, angrily, passionately trying to persuade the religious to their point of view,” wrote columnist Richard Bernstein. Even agnostics are in their sights, for these new atheists allow no room for doubt. To them, there simply is no God. End of story.”

Read the whole thing online here, or hang around any subway stop beyond the shadow of Manhattan and pick up a hard copy.